Generations pass,
The earth remains forever;
The days dawn and set,
The winds blow round the compass,
All streams flow into the sea –
Creation’s order prevails;
Everything God does
Originates and endures,
Through His time for all;
What is has already been,
What will be has been before –
God will call all to account. 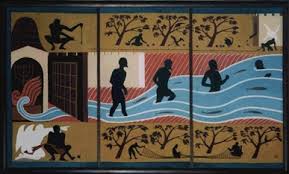 The River shall Flow Out from God’s Temple

Mark well, Son of Man –
Waters flow from the Temple
At each compass point;
Steady trickles, torrents form –
A mighty river!
Verdant banks shall be nourished,
Salt waters made fresh;
Swarms and shoals made to flourish –
Son of Man, do you yet see?

The breath of life blows
Wherever the river flows –
Fishermen, prepare!
Cast your nets, bring home the catch!
Vines and trees abide,
Bearing vibrant abundance –
Fruit of ev’ry kind:
The river’s flow brings forth life!
Do you see, the Son of Man?

written in response to the dVerse Poets’ Pun Poetics prompt – “the river”, and inspired by Ezekiel 47:1-12

Love rejects evil;
It rejoices with the truth,
Not records of wrongs,
Which too easily anger;

Love honours others,
It is never self-seeking;
It does not envy,
Shall not boast, is not proud;

written in response to today’s prompt at The Daily Post – “record” – and re-working the well-known opening eight verses of 1 Corinthians:13

through our God’s mercy,
His Spirit of righteousness –
we shall not lose heart;
we do not use deception,
employ secret ways,
nor do we distort His words –
truth set forth plainly;
commend ourselves to conscience
in the sight of God;
to those who are perishing,
the gospel is veiled –
unbelieving minds blinded,
unable to see the light –
the glory of Christ,
the very image of God;
we preach Christ as Lord,
submit ourselves as servants
for Jesus’s sake;
‘Let light shine out of darkness,’
God’s glory displayed;
His light shines in our hearts –
the knowledge of Him,
the face of Jesus Christ;
So then fix your eyes
upon the unseen;
what is seen on earth passes,
what is unseen is eternal

written in the style of a ‘Choka’ as suggested by the dVerse Poets’ Pub:

“The Choka or ‘Long Poem’ is believed to be the most intricate of Japanese poetry and was used to tell a story; many were epic with over 100 lines.  This form was popular between the 1st and 13th centuries, the earliest example was discovered in the 1st century and described a battle.  It was 149 lines long.  The Choka had a tradition of being recited in a high-pitched voice. This form is based on a series of Katauta joined together. The Katauta is considered the basic unit of Japanese poetry using either the 17 (5-7-5) unit onji or the 19 (5-7-7) unit onji.  In Western terms an onji is what we call a syllable.  Many of us are familiar with these particular onji as we have used them in writing haiku, tanka and sedoka. The Choka is an unrhymed poem alternating five and seven syllables that ends with an extra seven syllable line. You can use the 17 or 19 onji (syllable) style.  It can be any number of lines that you choose.”

This Choka also draws on yesterday’s prompt at The Daily Post: “unseen”, and is inspired by 2 Corinthians 4.