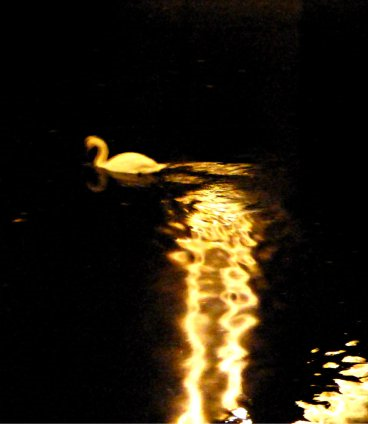 Sycophantic fauns herald hollow reign
Empty promises clash, petulant threats ring
‘I, Zeus, shall make Olympus great again’
(When you’re a god, you can do anything…)

How small this ‘god’ bestriding his world
Devoid of love’s wisdom, adorned with lies
How heavy the burden for the future unfurled
When blood shed downstream, hears poor Leda’s cries

The photo above prompted this poem alongside the legend of Zeus and Leda. The photo comes from Sue Vincent’s Thursday #writephoto prompt.

Leda and the Swan is a story from Greek mythology in which the god Zeus, in the form of a swan, seduces Leda, the wife of Tyndareus, King of Sparta. According to later Greek mythology, Leda laid two eggs, bearing Helen and Polydeuces (children of Zeus), and Castor and Clytemnestra (children of her husband). The story was the subject of W. B. Yeats’s celebrated poem (copied below), in which it is subtly suggested that Clytemnestra has somehow been traumatized by what the god-swan has done to her mother, contributing to further trauma within the story of the Trojan War, in which Clytemnestra was the wife (and ultimate killer) of King Agamemnon.
(NB the plot of the movie ‘Troy‘ doesn’t bear much resemblance to the Greek myth, but if Hollywood can and does re-write history, then why not myth?)

Leda and the Swan
W. B. Yeats, 1865 – 1939
A sudden blow: the great wings beating still
Above the staggering girl, her thighs caressed
By the dark webs, her nape caught in his bill,
He holds her helpless breast upon his breast.

How can those terrified vague fingers push
The feathered glory from her loosening thighs?
And how can body, laid in that white rush,
But feel the strange heart beating where it lies?

A shudder in the loins engenders there
The broken wall, the burning roof and tower
And Agamemnon dead.
Being so caught up,
So mastered by the brute blood of the air,
Did she put on his knowledge with his power
Before the indifferent beak could let her drop?